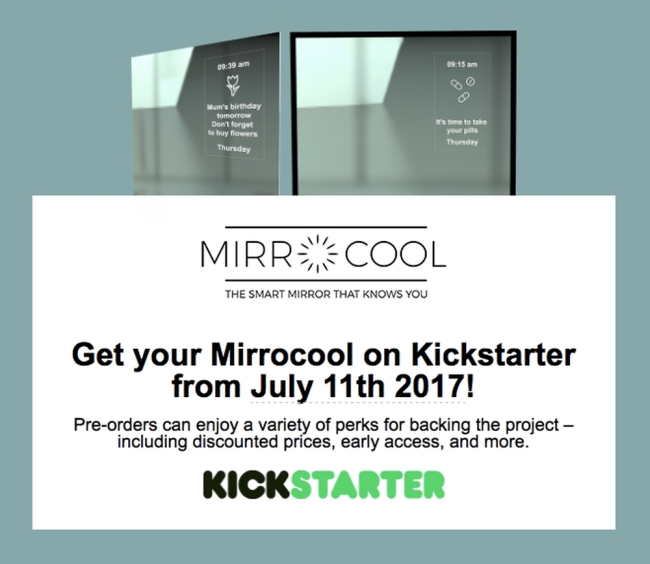 Mark your Calendar: July 11, 2017, MirroCool, the Only Smart Mirror with Facial Gestures Recognition Coming to Kickstarter

The campaign is set to launch July 11, and early backers will have exclusive access to a variety of rewards and discounts.

MirroCool is a groundbreaking new device that harnesses the power and convenience of a smart mirror and integrates it with the world of touch and voice-free technology to introduce the marvel of FGR. MirroCool takes all the best features in other by mirrors and revolutionizes the device with a proprietary, advanced technology known as Facial Gestures Recognition. FGR can recognize up to 70 unique facial positions and use these to complete a task or other function. With no need to tap or speak, users can make a facial gesture -- such as smiling -- to quickly get all the information they need. FGR conveniently displays anything from upcoming appointments and medical reminders to current traffic and weather conditions.

Wojtek Kaszycki, MirroCool CEO told The Tech Ranch newsmagazine during an interview, “One of the most intriguing features about MirroCool is that it uses Facial Gesture Recognition (FGR) technology, a little-used technology in home automation. It does not use voice or a touchscreen, so it’s completely hands-free and voice free. The device activates once it recognizes your face, so you could be brushing your teeth, shaving, applying makeup, or blow-drying your hair at the same time as organizing your day and catching up on current events. Think increased productivity and efficiency."

The Smart Mirror can be mounted wherever it is most convenient to its users – the hallway, living room, and beyond.

Further, MirroCool is equipped with a camera which recognizes registered user profiles through the device. Any time an unregistered profile is detected, users will be alerted through the intuitive MirroCool app. Users can snap selfies using the app and have them sent directly to a mobile phone for quick sharing. The mirror's visual configuration can also be controlled by the widget manager to set up specific alerts and news based on user preferences. As mentioned, the camera can also be activated and deactivated at any time for security and peace of mind – even if a user is not at home.

The device content is securily uploaded to MirroCloud. And the display  is easily turned off if you would rather not be recognized.

MirroCool Smart Mirror was developed by a team of cutting edge innovators coming from industries as varied as mirror production, visual monitoring systems, and access control. MirroCool integrates these verticals and delivers one phenomenal device: the MirroCool, a smart mirror and automated personal assistant.

To schedule an interview or obtain an investor packet, contact Anne Howard from the AH Marketing Group at:

MirroCool head office is located at: